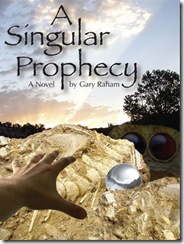 70 million years ago, an alien race, fleeing the destruction of their world, landed on Earth. Here they would recreate the world they had lost. Unfortunately for them, Late Cretaceous Earth was a fiendishly hostile place, and it destroyed them. That is, it destroyed their bodies. Before they died, they used their technology to preserve their personalities in anticipation of the evolution of a more hospitable environment.

In our own time, a young paleontologist on a dig pries a sphere from the midst of fossil dinosaur bones and suddenly finds himself the host of one of those personalities. As they struggle to coexist in one body, the paleontologist and his not–so–welcome guest learn that the alien personality is not the only one to have reawakened. Moreover, the conversion of part of the earth into a recreation of the alien world that was lost so long ago is well under way.

A tale of alien possession and deep time becomes a moral struggle for both human and alien. The latter, especially, is forced to question its fundamental beliefs about the superiority of its kind and its presumed right to take over a world already inhabited by beings the alien finally recognizes as morally and intellectually on a par with itself.

The alien worldbuilding, told through flashbacks and the memories of the alien refugees, is simultaneously dreamlike and convincing. The biology of the aliens, and in particular their imaginative lifecycle, is shown to us mostly through their eyes, giving it a welcome solidity and realism. Too often in sf novels, such details struggle to rise above the level of intellectual exercise. One stage in the life cycle, the ambuli, we first see through the aliens’ memories. Later in the novel, we suddenly see ambuli through the eyes of humans, and instantaneously the ambuli become terrifying and very alien predators. Raham uses this technique of a double view of things very effectively.

For more information about Raham and his work and writing, see his Web site. To buy A Singular Prophecy, click on the image of the cover, above.