Oh, what the heck. I still haven't heard from Wildside about a publish date for the reissue and whether they'll be using my cover, so here it is: 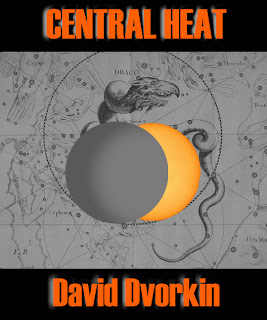 It never stops! We're all going crazy! Send help! Or whiskey, at any rate.

Yesterday, I again spent my lunch time chipping and hacking and shoveling, taking advantage of warm weather (above freezing, anyway). I managed to break down and shovel away part of the ice wall created at the end of the driveway by the snow plows. Dug my car partly free, although I discovered that the wheels are trapped in fairly solid ice. I was hoping that the forecast - another installment of the regular weekly blizzard - would be wrong and the exposed ice would melt some more, or at least would soften a bit and lose some of its grip on the concrete underneath.

But at least I'm continuing to work away at Time and the Soldier. The finish line keeps receding, but I know it's really there and I'll reach it. I just don't know when.

Wildside press just sent me the proof for the reissue of my novel Central Heat. Last I heard, it was due to come out this month, although I suspect it may be February. For now, I'll be spending my time reading the proof rather than working on Time and the Soldier.

For this reissue, I made some significant changes from the version that was published by Ace Books. More accurately, I returned the novel to its original, brilliant form, which Ace insisted on changing. They cut it a bit for length, and they wanted me to tell the story in a more linear fashion. Originally, it jumped back and forth in time, but Ace said that would confuse readers. Now it jumps back and forth again.

I also created a cover for the reissue and sent that to Wildside, but I haven't heard if they plan to use that or if they're coming up with one of their own. Once I have the final cover, whatever that is, I'll replace the simple Web page in the link above with one that includes the original Ace cover and the new Wildside one (and maybe my proposed one, too), along with a couple of chapters from the book.
Posted by David at 11:47 AM 4 comments:

I managed to move a huge chunk of the ms. to a better place. The whole now flows better (I hope). There's one more such move that might need to be made. I'd been fretting over both, so now I only have one to fret about. I think that once the second chunk has been moved, I'll have prose tweaking left and finding places to insert Important Plot Points that somehow got left out and which I now have in a Notes file.

I worked at home today, so I spent my lunch time trying to break up the wall of ice that separates the driveway from the street. It's amazing what a couple of weeks of snow and warmth and melting and refreezing can create. I worked at it with my ice whacker smacker (I don't know the proper name* for the tool; it looks like a hoe that's been straightened with a sledge hammer), assuming that it would break apart easily. Hah! I got the top few layers off and revealed a few inches of solid, granite-like ice. That stuff really grips the road beneath, too. Well, it's exposed to the sun now, when there is sun, so maybe by, oh, Sunday it'll be more responsive to whacking smacking. Or I'll whack smack one of my toes off. Which would give me a good excuse to lie on the couch and write on my laptop, while feeling sorry for myself. That almost sounds appealing.


* I bet it's something unimaginative, like ice chipper.
Posted by David at 8:29 PM 2 comments:

I got sick on the way back from Baton Rouge, and Leonore got even sicker a day or two later. Neither of us has recovered yet. It's that thing that's going around.

In spite of which, in a display of awe-inspiring courage and self-discipline, I've been noodling away at the manuscript, taking it in here and letting it out there and rewriting and fiddling. I've had the same experience everyone else does when doing this: some parts are even better than I remembered, other parts are . . . very much not as good as I remembered. There's still a lot to be expanded or added, so my earlier deadline was absurd.

The weather has continued to be much worse than a normal winter - much lower temps and more frequent snow. Main roads are okay, but sideroads are mostly awful. Sidewalks aren't too bad where people have shoveled, but they're truly hazardous where people haven't. (The city has laws about keeping sidewalks clear, and it imposes fines on those who don't, but a lot of homeowners and businesses don't seem to care.) Local emergency rooms and orthopedic surgeons are doing a land-office business setting broken bones, according to a report on local TV news recently. It's sobering to think about, as one skids one's way to the bus stop or the office.

Speaking of which, my briefcase is heavier than usual because I've been taking my heavy old laptop to work with me and working on the book during lunchtime. Makes me feel good, but walking with that weight one side makes the trip even more an adventure.

We did have a warm spell. That's what we normally expect after a storm here, but this one didn't last the way our winter warm spells normally do. I got out and shoveled lots and lots, trying to clear some of the snow keeping my car trapped. That was on the assumption that the warm spell would continue and I'd be able to get my car free. Hah. It's trapped again. Anyway, I was doing the shoveling wearing hiking boots, jeans, a t-shirt, and a hat for protection against the sun. It seemed very Colorado to me. 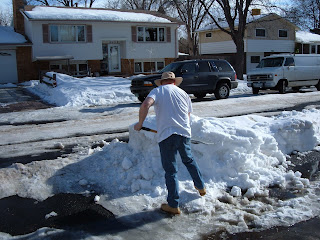 The Second (and Last) Great Denver Blizzard of Ought Six

Really wasn't all that great. By itself, it would have rated as a storm people would have talked about for a day or two, after which they'd have forgotten about it. Okay, maybe three days. However, the snow from the Really Great Denver Blizzard of Ought Six was still on the ground in many places, especially sidestreets, so this one did create problems. And of course everyone was spooked because of what had happened at the airport the week before.

We left on Wednesday, in the space between the end of the major airport cleanup from the previous blizzard and the beginning of the next one. We got back late Sunday evening -- later than scheduled, thanks to American Airlines' incompetence with planes and luggage. We plan to avoid AA in the future, if we can.

It didn't look as bad as we had feared. The main roads were fine, and the sideroads were, well, worse than when we left but not horrible. It was after midnight when we were approaching the house. We passed a young man who had driven deep into the snowbank beside the road and was really stuck. We tried to help him push his car out, but that was hopeless. Fortunately, another neighbor drove by in a pickup truck with a winch, so we shook hands all around and drove home. I had developed a really bad head and chest cold, and Leonore was displaying some of the early symptoms of the same thing, so I thought we'd done our neighborly part. And my shoes were filled with snow, anyway, so the milk of human kindness was freezing in my veins.

At home, we discovered that the driveway, which I'd cleared completely after the previous storm, requiring hours of shoveling to do so, now had at least eight inches of new snow in it, and that the snow plows had actually been through and had built up a small snowback at the entrance to the driveway. I took the brute force approach and gunned Leonore's Subaru through the snowback and into the driveway. Eventually, we got to bed.

This morning, I reshoveled the driveway, with many pauses to catch my breath because I felt as weak as a kitten. Now I'm feeling sorry for myself because my break is over and I had great plans for it and it was overall not much fun. Took laptop but was able to do little writing, for reasons I won't go into now. On the bright side, we had much fine seafood, and I had one cup of gumbo that I think was the best I've ever had -- and I've had a lot of gumbo over the decades in various parts of the Gulf Coast. Beaucoup seafood, I garontee, and as for that gumbo, whoee, talk about good!

We also saw lots of rain while we were in BR. There was a monster storm over the entire area, accompanied by lots of tornadoes at the Texas end of the storm. I think this was actually the southern end of the weather system that gave Denver its second blizzard. We were staying with my father-in-law and his wife, and their house is on a small lake. Picturesque, normally, but during the storm we were watching the lake creep ever closer to the house. At the front, the street had become a lake, and that was creeping closer, too. The rain stopped in time, and both lakes receded slowly, but it was exciting for a while. My f-i-l mentioned in passing that, when we went out to look at the lake more closely (from the cover of the carport), we should keep our eyes open in the pitchy dark for gators that might have left a nearby swamp to go exploring. Earlier, before the pitchy dark set in, I saw a huge snake writing around in a neighboring driveway. Fantastic food in the South, but you can have the place.

Interesting number: After the first, main bout of rain, my stepmother-in-law went out to check the rain gauge. She said it held six inches and was full, so that hours-long downpour had dumped at least six inches. Normal total annual precipitation in Denver is under 13 inches.
Posted by David at 1:40 PM 4 comments: