The Rassmussen polling company publishes a daily tracking poll of the Democratic (and Republican, but who cares) primary race. Unlike other such polls, this one displays the actual daily numbers as opposed to occasionally letting you know what the current state of the race is. You can see those numbers in tabular form here.

(Rass only publishes the numbers for the top three Democrats, but does anyone other their most rabid fans think that Dodd, Biden, Kucinich, Gravel, or Schlumwallinger has a realistic chance of winning the nomination?)

It's hard to get an overall feeling for the numbers when they're displayed in that format, so I decided to put them in a spreadsheet and generate simple line graphs. The result is here.

I'm planning to keep updating that graph with the new Rassmussen numbers every day, so anyone who's interested can follow the bouncing ball of our national destiny at that link.

I think I'll also put a link to that graphic on the side.

Gore is really my man, but I'm beginning to think that he won't run. In the meantime, I'm backing Edwards, and I'm getting more and more comfortable with that choice as Edwards gets more and more populist. So I'm hoping to see the Edwards line keep rising. Right now, it's happening sloooowly, but it does seem to be happening - but over the short term, so far.
Posted by David at 7:53 PM 5 comments:

Did Eureka just jump the shark?

We've been hooked on the television show Eureka since its first episode. The premise is clever, the characters are likable and well acted, and the scripts tend to be pleasantly witty.

But tonight's (9/11/07) episode annoyed me considerably. Some parts of it were fine, but the underlying theme of the town's scientific geniuses finding religion because of mild stress made me grind my teeth.

At the start of the episode, it's clear that almost no one in town is interested in churchgoing. Given that Eureka is filled with the world's greatest scientific geniuses, that's appropriate. Studies show consistently that scientists tend to be much less religious than the general public, and the more advanced they are in their field, the less likely they are to be religious. However, when a series of rather minor (by Eureka standards) calamities strike the town, the geniuses start heading to the church. (It wasn't clear if there's more than one church in town.) This didn't happen in previous episodes, when Eureka faced much more serious dangers. We also know that it doesn't happen in real life -- that not only are there atheists in foxholes, the experience of the foxhole tends to destroy people's faith, creating more atheists. More atheists come out of foxholes than go into them!

Moreover, at the end of the episode, it's made clear that many of the brilliant scientists have retained their new-found religion, even though they have discovered that the town's recent problems were manmade! Aargh!

I assume this was due to network pressure, in turn due to pressure on the network from rightwing/fundamentalist religious groups. I don't know that; I haven't read anything to that effect. It could have been simple cowardice on someone's part. Or ignorance.

I guess I don't really care what was behind it. I only know that I'm quite pissed off right now.
Posted by David at 11:11 PM 11 comments:

Not so silent, after all

Whew. What a relief.

I took my hearing aid to the audiologist today, and the situation is not as bad as it might have been. The innards are still working. It's just the casing that was destroyed. So the audiologist took a new impression and will send that to the factory, along with the smooshed hearing aid with its electronical guts, and they'll recreate the thing for me. Not cheap, but a fraction of the cost of a completely new one.

So possibly by this time next week, I'll be able to hear with both ears again. At least, to the extent that a deafish guy with hearing aids can hear.
Posted by David at 8:28 PM 7 comments:

A nicety is a small, important detail that can make a large difference. The word is commonly misused to mean an appealing characteristic, but in fact a nicety may not be nice in that sense. For example, knowing which knife and fork to use for which food at a formal banquet is one of the niceties of formal etiquette, but most of us would agree that such rules are silly, not nice. The confusion arises because the word nice, on which nicety is based, has changed meaning over time. The Latin word it comes from meant foolish or silly, but in English, in different centuries nice has meant timid, then dainty, then precise, then pleasant. Some of the older meanings survive. A subtle difference between two things is still called a nice distinction.


I'm collecting all of these at: http://www.dvorkin.com/davidsdefs.html
Posted by David at 6:56 PM 6 comments:

Republicans have long tended to build cults of personality around their leaders, and when one of their own is in the White House, they go completely around the bend. In the case of Georgette, I mean Little George, I mean George W., they've tried to tell us that he's brilliant, saintly, and a rugged, manly, tough athlete and weightlifter. He bicycles! He cuts brush! He can beat up any other president on the world stage! (I'd like to see him try it with ex-KGB thug and still a thug Putin.) He bench presses a gazillion pounds!

This has always infuriated me, and the last item has infuriated me in particular. I can't remember what the poundage claim was, but it was something impressive. Rather, it would be impressive if it were true. Even with the carefully staged and posed photos, one can see that Georgie is no athlete and certainly not a serious lifter.

Here's a picture that his handlers didn't manage to pose carefully enough. This is from our fake president's recent fake visit to Iraq in his latest attempt to boost support for his fake Crusade. 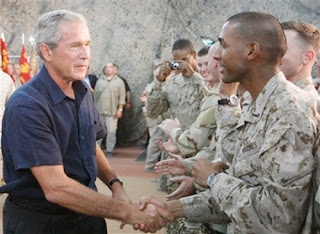 Now, I'm not going to find fault with Georgie for his sagging jawline and wrinkly neck, which are so painfully apparent in contrast with the jawline and neck of the young man he's shaking hands with. Those are inevitable with age even in genuine athletes. And even though I think that if Georgie were as athletic as his worshipers like to think he is his jawline would be firmer, I'm sympathetic because of my own jawline, and I'd be willing to commiserate with Georgie about the sad effects of age over a beer or two. Oops! I forgot! He no longer drinks alcohol! Yeah, right.

But look at that arm and that chest. Those are not the arm and chest of a serious lifter of Georgie's age. Those are the sagging chest and arm of an older man who is not in particularly good shape for his age. By George, George, you've become your father! But with a lower IQ.

Okay, people get old. (Unless they're unlucky enough to be Iraqi civilians, in which case, thanks to George W. S.O.B. Bush, the odds are against them.) And no one is morally obligated to be an athlete. It's the pretense that bugs me. The lies. The posing. The swagger.

And the fact that millions of Americans voted for this pile of horse manure! Twice!
Posted by David at 12:01 PM 4 comments:

Car 54! Car 54! Check out report of gentleman loitering in front of liquor store. ...

I'm watching the evening news on Channel 2 in Denver, and they said that a gentleman was reported loitering in front of a liquor store in a scuzzy neighborhood. Said gentleman approached a customer, asking for money. Words were exchanged. Gentleman stabbed customer and ran away. Gentleman was later found hiding in a dumpster.

"Sir, I must apologize for addressing you even though we have not been properly introduced. I wonder if you could advance me a small loan -- What? You would, would you? Sir, you leave me no alternative but to draw my knife and stab you. Hah! There! Take that, sir! And now, I take my leave. I bid you good day, sir. You have my card. I shall be in my dumpster. Harrumph."
Posted by David at 9:30 PM 17 comments:

The time-travel novel that will never be finished is requiring more tweaking than I had anticipated. (Don't they all? Or don't many of them, anyway?)

So I've decided to order myself to be done by my birthday, which will be five weeks from tomorrow.

Five weeks! That's, like, an enormous and immense amount of time! Of course I'll be done by then. Although that does sound a bit like something I remember saying to a coworker many, many years ago: "That hard drive gadget holds five megabytes?! Man, you'll never fill that up!"
Posted by David at 11:31 PM 5 comments: