I recently realized that this year marks 50 years since I came to the U.S. and 30 years since my first novel was published.

Those are two immense spans of time and are not consistent with the fact that I'm only 23 years old. Something is awry.
Posted by David at 10:54 PM 6 comments:

Our son, Daniel, who has been in Minneapolis, in graduate school at the U. of Minnesota, will be back in Denver this weekend, courtesy of the University of Colorado Health Sciences Center.

In addition to Minnesota, he applied to the PhD programs at a few other schools, the Health Sciences Center being one of them. When he left Colorado, the local program in bioinformatics was just getting under way and wasn't very impressive, but it's been considerably beefed up since then. He's doing biostatics at Minnesota, but he started out in bioinformatics, and I think there's a big part of him that still gravitates toward that field.

The Health Sciences Center flew him and a few other candidates into town for the weekend for a mutual dog-and-pony show. We won't see him till Sunday, and we're eager to see how he feels after a weekend of being treated well and being back in his hometown. There will, however, be absolutely no parental pressure of even the most subtle variety. This is our solemn vow, sworn on the altar of progressive parenthood. I can't swear for our unconscious minds, however.

Daniel did receive an acceptance from the PhD program (biostatistics, I think) at Ohio State U. in Columbus, so he does that have that waiting, at any rate.

Oh, blog-relevant addition. Daniel and I coauthored two novels and have always wanted to do more together. His time is overly full and probably will be for years yet, but if he did decide to squeeze in another collaboration, it would be much, much easier to do so if he were living in Denver again. So while that's not a factor in his decision, it might be an effect of it.
Posted by David at 8:14 PM No comments:

In her blog, agent Lori Perkins said this:

Reading that reminded me that I recently came across the sheet of paper on which I listed all the publishers I planned to send my first novel to. The one that bought the novel, Pocket Books, is outlined in red with "2/25/76!" written next to it in big, red letters, and if I understand my cryptic marks, I had queried four publishers on the list before Pocket, so I'm guessing that I made up the list in the summer or fall of 1975.

I don't remember where I got the names from, but I do remember that the publishers on the list were all independent and all said, in some reference book or other, that they were willing to look at science fiction. Many of those names no longer exist at all; some are still in business, but only as imprints or divisions of other publishers. I think there are also a few on the list that still exist but no longer publish fiction. There are 71 names on this list. Probably, an agent of those days, having much more knowledge of the market than I did, would not have been interested in some of those houses, but it's still a long list.

This illustrates how far the number of available markets had shrunk in the twelve years before Perkins entered the business. In her post, she says that it has now shrunk considerably more.

So here's the list. (Some of those names are guesswork, because I can't read my own handwriting!)

The snow is mostly gone, thanks both to warm temperatures and those humongous machines. I was finally able to get my car free yesterday evening. It's now resting in the driveway, looking weary.

The Spanish group is beginning to gather downstairs. Incomprehensible phrases are drifting up to my study. It's time to remove my hearing aids.

Chris asked in a comment about translations of my books.

My first novel, The Children of Shiny Mountain, was translated into German and Italian. It was strange and exciting when copies of those editions arrived in the mail.

The only other novels that were translated where the Star Trek ones. The Captains' Honor had a Hebrew edition. When that one arrived in the mail, Leonore thought it was a Klingon translation. Before that, I hadn't thought of the slight similarity between the Klingon alphabet and the Hebrew one. I wonder if that's coincidence? I can still read Hebrew well enough to make out my name and Daniel's name, as the authors, and also to be able to tell that they translated the title correctly: as Captains', not Captain's. References to the book in the U.S. often use the singular possessive for some reason. Makes me wanna go all Klingon on them.

Leonore read the German edition of my first novel and said it was an excellent translation -- even better in places than my original. Gasp!
Posted by David at 7:41 PM 6 comments:

It's more than snow

However, what the title refers to is my realization that I've probably given the impression that I've been battling snow and ice and not writing. In fact, I've been lugging my heavy old laptop to work every day (uphill both ways, against the wind, over the ice, fighting off the dire wolves) and writing during lunch. Except for the days when I work at home - normally Wednesday and Friday - when I've been using my lunchtime to do the snow-and-ice thang.

I won't talk about my writing progress in detail because I'll end up repeating the overly optimistic stuff I said in my first few posts on this blog, and that would be silly. However, it's really taking shape! It's really getting there! It's getting really close to being a final draft! Etc.

At least, with the snow, I can see progress. No, that's not quite true. I see progress while I shovel and chip away, but then at night there's a big refreeze and everything is undone. We've always had a problem in this neighborhood with heavy snows covering up the storm drains, so any snowmelt forms small lakes in every driveway and even covering the sidewalks, and that refreezes at night, making the morning walk to the bus stop really exciting. We're in a warmup now, and it's supposed to stay above freezing tonight and tomorrow night, so that should help. Also, the city sent some humongous machines our way. They broke up the ice (and, I fear, the street beneath) and piled it in the middle of the street, creating two narrow lanes with an impressive wall between them. A day or so later, more humongous machines showed up to haul away the ice. So now there's a chance that the melt will actually drain away.

My car is still stuck in ice and is immobile. This Wednesday, I'll try to free it again. Wed. evening, Leonore will be hosting her monthly Spanish conversation group meeting. A big crowd always shows up, rain (a rarity in Denver) or snow (not so rare, this winter), and we need to have parking spaces available on the street. I really want my car out of the way by then.
Posted by David at 8:01 PM 1 comment: 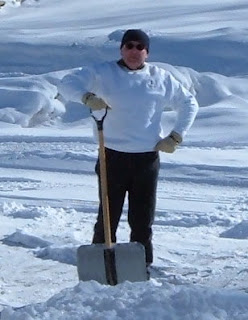 Take that, Mother Nature!
Posted by David at 3:29 PM 2 comments: