Mickling along. Actually, rewriting along.

My initial unhappiness over the non-greatness of the old prose wasn't entirely justified. Some parts are stilted and ineffective, but other parts are fine. So rewriting is going faster than I initially feared it would.

There's much more to be done than I had realized, though. I wrote the first part of the novel without all of the plot details ironed out. Later, I pinned various things down and made notes. Now I find quite a few places where hints and foreshadowing and suchlike need to be inserted, which can require some fairly major twiddling with scenes I had written before and thought fixed and final.

But it's all fun. It's a good way to spend a vacation. We'll be off to Baton Rouge for a few days -- Wednesday through Sunday -- but I'm taking my laptop along in hopes of continuing this process while there. Maybe I'll do some of it at Coffee Call, a nifty cafe-au-lait and beignet place there. Well, it used to be nifty when it was mostly filled with studying and coffee-guzzling LSU students, but I wonder if it's now swamped because of the large numbers of people from New Orleans who moved to BR, pretty much permanently, because of Katrina. My father-in-law and his wife say that the traffic is far worse than previously.

Anyway, my original deadline for the novel was completely unrealistic, it's now clear to me. I'm not going to set myself a new one. As long as I'm making reasonably steady progress, I'll be happy. That would be a big change from the few years immediately preceding the starting of this blog.
Posted by David at 11:21 AM No comments:

After I'd spent some time looking over Time and the Soldier, trying to figure out what to cut and where to repaste it, and getting nowhere, I decided go back to the first page and start the tweaking and rewriting process, my hope being that that would refresh my overview of the whole thing and make any necessary restructuring clearer. So that's what I've been doing for the last few days, helped muchly by the fact that the Great Denver Blizzard of Ought Six forced my company to shut down for two days, and also by the company having closed at noon today. (It's now closed till Jan. 2.)

I remembered the first few chapters of the book -- the big chunk that I wrote initially, about 15 years ago, and had left untouched except for two short new sections I added recently -- as being brilliant. On rereading, I discover that, well, um, they're not. That's a disturbing revelation. So now I'm hoping that rewriting will make that chunk brilliant. After all, it has to match the parts I've written recently, which are, as I remember well, brilliant. I hope.
Posted by David at 12:25 PM 4 comments:

The Great Denver Blizzard of Ought Six

Why, you young people today. You have no idea what it was like, back in the Great Denver Blizzard of Ought Six. Why, back in those days --

The blizzard really got underway yesterday, Wednesday. We had to go out in the morning. I had a periodontist appointment (my boss joked that that sounded like one of those beasts that died out 65 million years ago), and then later Leonore had her annual physical scheduled. I drove her to that, and then to pick up a couple of prescriptions. We ran a couple of errands, since we were out, and I bought a new humongous bottle of Bulleitt Bourbon, since I was out.

Scary driving. Leonore's Subaru was fine, but I had to dodge some other people who weren't in Subarus and weren't fine. Visibility was not very far beyond the end of the car.

We got back around 1 p.m. I started a pot of tea going, poured myself a bourbon, read an e-mail from my boss saying that the company has shut down for the day, and I felt rather good. 1 p.m. was probably about the latest it would have been feasible to be out and about.

Today, the company, along with the rest of the state, is still shut down. We're still shut in. I'm still sipping tea and bourbon. Yesterday, I did some work remotely, but today the only work on my schedule is shoveling snow, which will surely be work enough.

Now, as long as the power and my broadband connection stay up, life will be okay.

Here are a couple of pictures. First, my car, parked on the street in front of the house:

And here's a view from the back door, looking toward a neighbor's backyard: 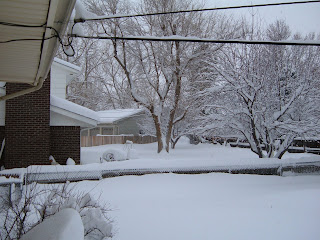 Click on the pictures to see bigger versions. In the case of the second photo, it's clearer in the larger version that the dark line across the bottom third is the top of a fence.
Posted by David at 12:21 PM No comments:

Well, I've been thinking about writing.

This will sound odd, but this evening I realized why I've been so reluctant to get back to this book. I was looking over the ms., wondering what large blue chunks might still be there, and I realized/admitted to myself that the next big task isn't eliminating blue but reorganizing, restructuring major parts of the book. I knew that, on some level, but I was refusing to admit it.

The story isn't linear. As it is now, it follows the three main characters, or four as it turned out, on their travels through time, focusing on one for a long time, then switching to another, etc. That resulted in overlapping stories and in some scenes being done twice, from different points of view -- something like the Back to the Future movies. I loved those movies and thought them brilliant, but that gimmick turns out to be confusing in places in this ms.

I have to reorder things now. The story still jumps back and forth, but the narrative flow has to have a more linear feel to it. As it is now, it's confusing and can jerk the reader out of the story. I know what's going on (well, at least I hope so), but someone else won't.

Without consciously realizing it, I knew all of that and was reluctant to tackle the problem. As it happens, I had a somewhat similar problem with my last novel, Business Secrets from the Stars. That book doesn't involve time travel, but the original version had two different stories that I had a lot of trouble combining properly. And yet, BizStars ended up, in my opinion, as far and away the best thing I've ever written, so I have to keep reminding myself of that and take heart from that experience.

Coincidentally, I was talking on the phone to my father tonight. He's 97 and knows nothing about computers and generally cares even less, but tonight he asked me to explain what a blog is. Given his lack of background knowledge, that was harder than one might expect, but I think I made it clear enough to him. I began to wonder if there are blogs devoted to recording the bloggers' conversations with their aged parents. Given the number and diversity of blogs, it seems highly likely that there are. I wouldn't want to read them.
Posted by David at 9:50 PM No comments:

What's It All About

Originally, I wasn't going to say anything about the plot or the gimmick of Time and the Soldier. After the last post, there seems no reason not to do so, and I thought that a very brief synopsis might be of interest. "Brief" is the tricky part. The plot is long and complex, and there's no point in going into it very far, especially since there are twists that are supposed to be suprises to the reader. So here's at least the first part of the story.

Near the end of WWII, three people are recruited by Tempus, a mysterious, somewhat sinister organization. Tempus has close links links with the OSS and other Western intelligence agencies. It's rolling in dough and employs some of the top scientists in the world, competing for them with some other big project it knows is underway but hasn't been able to penetrate. Tempus has finally managed to send people forward in time, but only for short distances, and only forward, not back. (The forward-not-back part is explained with appropriate pseudo-science and plays a part in the plot.)

The three recruits - Tommy, Frank, and Ellen - will be sent forward with two goals: acquire futuristic weapons that can be used to end the war quickly and ensure US hegemony, and find a way to travel backward in time to 1945 with those weapons. The assumption is that the scientists of the future will surely have discovered how to go back. Tommy and Frank were both transferred from the US Army, Tommy from the fighting in France and Frank from Italy, and Ellen is a civilian. Tempus has no idea what they'll encounter in the Wonderful World of the Future, so it will hedge its bets by sending them to different points: Tommy fifty years ahead, to 1995, Ellen to 2045, and Frank to 2095.

During their training, a love triangle develops. They know that if they don't back out, they'll very likely never see each other again. They also have reason to believe that Tempus won't let them leave alive, so they have no choice but to jump forward.

Two other characters are important: the head of Tempus, and the driving force behind it, a creepy guy named Hughes; and a brilliant woman named Dolores who is in charge of much of the research at Tempus.

The first part of the book follows the three protagonists to the point where they jump. After that, the story follows each one's adventures in the future. I'm reluctant to say more, because this is where it starts to get really twisty, with interrelated stuff and backward jumps and things getting blowed up real good and some blood and sex (not together! not that kind of book!). Even condensed to the degree the above is, describing much more would make this post absurdly long. Which may be a sign that the plot is overly complex and the book will be too long. All I can do is hope that's not the case.

Maybe, when the thing is in some final form, I'll post some scenes here. I dunno.
Posted by David at 7:32 PM 5 comments:

The Utter Evil of Steven Spielberg

I just read on scifi.com that Spielberg is going to write a pilot for Fox TV about a couple of young physicists during WWII who invent time travel and jump forward to 2007 to find something they can take back to end the war with.

So what, you say?

So, that's the gimmick in Time and the Soldier, upon which the rest of the long, complex, dense plot is built. So the book is DOA. That's the way things work in gimmick-driven genres.

I'll press on with it. Having put so much into it, I want to finish it. Also, I know it's going to be a terrific sf novel. But it'll be dead on arrival, anyway.

Of course I can't really blame Spielberg, even if he did read my mind and steal my idea. (Joke!) I had this idea 15 years ago, or so, and I wrote the first part of the book back then, and then I let it lie for many years before finally getting back to it. During those years, I often told myself that I should finish the book because someone else was bound to come up with the same gimmick, and then the book would be dead. But I told myself, "Yeah, yeah, whatever," and wrote other stuff instead. And this is the result.